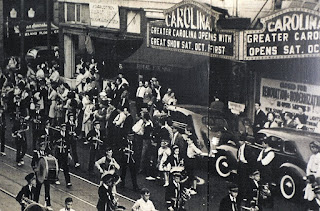 The original picture was taken in 1938 by Cecil Brodt, founder of The Brodt Music Company of Charlotte NC. In the spring of 2000 the Carolina Theater was undergoing a major restoration. There was a chain link fence separating the construction site from the sidewalk, and in the midst of all of that were large, mural-sized photos from the theater's past. I took pictures of the mural-sized pictures and have just now gotten around to scanning in the image. Click on the above small image to see a picture large enough to see what I'm about to discuss. The vertical line running through the photo reflects the partitioning that was present on the mural that I photographed.

From the Carolina Theater Website I was able to learn

In 1938, the theatre had a major overhaul; the air conditioner was replaced, larger seats installed, new projectors and sound equipment were put in and the murals were replaced. The new murals were put on acoustic tiles to help the patrons hear the new “talkies” with more clarity. The original acoustics were so lively that the dialog could not be easily understood.

It can be seen on the marquee that the theater is set to reopen on Saturday October 1st. Oct. 1 1938 fell on a Saturday, thus establishing the year of the photo. Most likely the occasion of the parade was the Labor Day parade held annually in Charlotte. Labor Day in 1938 fell on September 5. See the comments section below for some more background supplied by Michael Johnston, the archivist for the Carolina Theater.

The back story is that it my father and his family lived in Charlotte from 1935 on. They had moved there from Norfolk, Virginia. My grandfather, Isidor Glotzer, owned a fur shop which can be identified by its awning in the photo. It was called The Royal Fur Shop and may be seen just to the left of the Carolina Theater.

In the spring of 2000, during a trip to Charlotte to try to see some of the "old haunts" that my father remembered our first stop was downtown where we came upon the Carolina Theater renovations. We started examining the photo and my father remembered that the fur shop was right next door to the theater. He wondered aloud if we could spot the fur shop and sure enough the name of the shop could be easily read from its awning.

Then I wondered aloud if we could pick out my grandfather. My father's immediate response was that the old man would have been inside working and not spending time watching a parade. I said I wasn't so sure, and before long we could make out a figure in the photo that just had to be him. 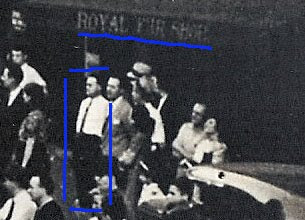 Under the Carolina Theater Marquee, can be seen the lettering on the awning of the Royal Fur Shop. Under the "Ro" of "Royal" can be seen a man in white shirtsleeves and a tie standing next to a man who seems to have on a jacket and tie who is under the "ya" of "Royal". My grandfather is the man in the white shirtsleeves. I've added a detail view which shows him as he's watching the parade.

Here's what my father (Donald Glotzer) had to say about working at the Carolina Theater.

At one point I was an usher at the Carolina Theater. I had a uniform that almost fit and you showed people to their seats in the dark using a flashlight along the aisles and then along the row where there were seats (the movies ran continuously so you could come in the theater in mid-movie and then see the beginning or whatever). I lasted about 1.5 wks until I quit over some perceived unjust treatment. Obviously as a theater usher you get to know the dialog practically by heart since the movie would run all day for a week. I think during my sojourn there there was some "Indian" dialogue in one of the 2 movies I ushered for, to wit: "Ux tux nux" which I think could be translated 10-4. But maybe that was in Blazing Saddles.

Anonymous said…
Interesting! The photo you saw on the blow ups in front of the theatre that blew away in a storm (all destroyed) was originally taken by Cecil Brodt, founder of Charlotte's great music store. I provided the original for the blow up and I am the archivist for the Carolina Theatre and its supporters. Soon, I hope to bring back a website with full resolution photos and videos of the history of the theatre.

Local fans who visited the Carolina yesterday — the Greater Carolina — must have been pleasantly surprised. An amazing amount of work has been done during the three weeks the theater was closed for remodeling and redecoration.

Not only has the surroundings, the atmosphere been improved, but also the sound, and the acoustics of the theater have been improved. More than 100 seats were lost in the installation of new seats. The seats are spaced farther apart, allowing long-legged cinema fans to sit down without going through painful contortions.

John Glotzer said…
Thank you Michael for your great comments. I have credited the photos to Cecil Brodt. Also I will reference your comments in the main text. Finally, I think this tends
to support my hunch that this was a Labor Day parade although it doesn't prove it. Labor day in 1938 would have been the fifth of September. While this is technically more than 3 weeks from October 2, (that would have been September 11) it's still quite close.
December 26, 2012 at 2:47 PM

Anonymous said…
My parents both worked at the Carolina in the mid 1950s she a ticket clerk and he as an usher. They met there and have been married over 53 years. They were both working when Elvis came for his show there and had many great memories
December 13, 2014 at 2:09 PM