Dogtra 3500NCP SuperX - backing out case screws is a bear! 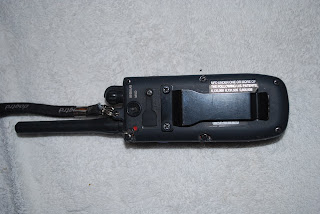 I have a Dogtra 3500NCP SuperX shock collar. Without it my Dobie would not get any exercise because he'd play "keep away" whenever I threw his favorite ball for him to fetch. With a little "gentle reminder" he comes back and the cycle can begin again.

The collar worked well for about a year and a half but then the transmitter part wouldn't hold a charge any longer. A replacement battery can be purchased and they offer to do the replacement for you but that would entail a service charge not to mention shipping it there and back. So I ordered a new battery? How hard could it be to change a battery?

The 6 screws that attach the back of the case to the case itself are CEMENTED into the plastic. Or might as well be. With a screwdriver that was just the right size I was able to back out four out of the six with a fair amount of difficulty. The other two (i.e. the bottom left two in the picture) were not coming out. The screws require so much torque to loosen versus the size of the screw head, next thing I know both heads are stripped. I think the Dogtra design is a good one if you take the point of view that the battery is not a serviceable item. Like some Ipods. And since these devices are used in harsh conditions I'm sure they wish to have a tight seal to keep moisture and dirt out of the unit. But a tight seal is one thing - 1/2" screws that require 100 ft-lbs of torque to back out - that's something else altogether.

So out came the drill and the Dremel and it looked and sounded and smelled(!) like a dentist's office (you know that awful smell when they're drilling on your teeth - Ouch!) But I was able to gnaw away enough of the metal and plastic that I was able to pry off the back of the case. At some cost - the case will never be the same. But - it did work after a fashion. I got some new screws from the Dogtra folks (after a couple of mixups in the shipping department) and the unit is back together and functions as before.

If anyone faces this same situation and if I had it to do over - I'd advise shipping the unit back to Dogtra for battery replacement. They tell you that if you're technically savvy it can be done without this step. But they don't tell you that the case screws are bionically welded to the plastic and you'll likely strip one or more of them trying to get them out. If you ship it back for service - then it will be up to them to either do the replacement properly or make it right.
Dogtra 3500NCP SuperX Battery Replacement Stripped Screws