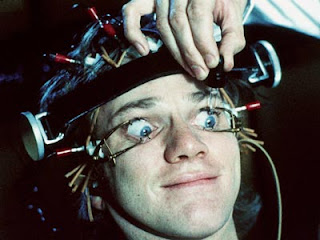 In Stanley Kubrick's film A Clockwork Orange (based on the novel by Anthony Burgess), the protagonist, Alex, undergoes operant conditioning, or aversion therapy, to modify his (ultra)violent tendencies. He's forced to watch film clips with violent scenes while drugged, and thus develops a strong negative response to violence. The movie and the novel raise questions about the morality of such treatments while at the same time illustrating their efficacy. 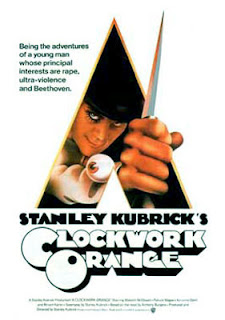 I had an analogous experience where something of this sort happened to me - really quite by accident - and I always thought it was an interesting bit of psychology/physiology and, unlike the scenario depicted in the movie and the novel, there are no troubling moral issues.

This is because at the age of 18, I developed a strong association between cigarette smoking and seasickness, with the net result that I haven't touched another cigarette for going on 40 years. Moreover, I retain strong negative associations to even such things as the cigarette packaging. I've often wondered if this kernel of an idea could be exploited to help people quit cigarette smoking or other bad habits. The caveat to this is that I was never all that addicted to cigarettes in the first place. (At least not compared to many of the people you see or hear about.) However, something in me changed as a result of the experience that I had - after it occurred I really felt like a version of Burgess and Kubrick's Alex.

Somewhere around the age of 14 I started smoking cigarettes occasionally. From the ages of 14 to 18 I went from being a smoker to a non-smoker a number of times. I was never the classic "pack a day" smoker - maybe more like a "pack a week" or someone who'd bum cigarettes off other people. But it was definitely something more than just a fad or a phase, because I can remember trying to quit and actually doing so only to "relapse" and have to start over again. So I was somewhere on the continuum between a casual smoker and a nicotine addict.

During the summer that I was 18, I went to Louisiana to work in the oilfields which lasted for about a month. Then I caught a finger between two giant engine heads that we were unloading from a workboat and I got a large hematoma under the fingernail that had to be drained. This would have been a huge problem for me if I were to have continued working in the oilfields, because the finger would be subject to repeated trauma. However, as luck would have it, at this exact moment I met a shrimp boat captain who offered to "take me fishing". So off I went on a shrimp boat for what turned out to be a three week stint of hauling up shrimp nets from the Gulf of Mexico off the coast of Louisiana.

The day before we went out the captain, the first mate, I and another guy (he and I were the "greenhorns" - the captain said "I always said I'd never go fishing with wet toilet paper, cold coffee or greenhorns and now I've got two of 'em") went to the grocery store to load up on supplies for the trip. We had to buy - well - coffee, toilet paper as well as basic food and other items. They said each guy could get a carton of cigarettes so I chose a carton of Marlboros. The whole process seemed pretty cool and like high adventure.

The first night out we didn't go out into the Gulf of Mexico but instead anchored in the Intracoastal Waterway - sort of the bayou - in any case certainly not the open seas.

The next morning we motored out into the Gulf and the seas were choppy, the wind was blowing, the boat was tilting from side to side and front and back, and the captain and first mate were shouting at each other and grinning from ear to ear. I thought it was great too - at first. And then - I finally realized what seasickness was all about. The next thing I know I'm curled up in a fetal position on the bunk and holding on to my breakfast like a drowning man holds on to a lifeline. It was bad.

And then it wasn't.

I don't know exactly what happened or how much time exactly went by, but I very quickly got my "sea legs" as the expression goes. At some point the extreme nausea went away and for the rest of the trip I could function as well as the rest of them. I think that the seas did calm down at some point but even if they did pick up again the extreme seasickness never came back.

A day or two or three into the trip I figured it was time to tear into my carton of Marlboros. Which I did and I instantly started feeling a bit sick even though the seas were calm and I was over my initial seasickness. When I had first starting smoking I remember getting a bit sick to my stomach, and this new feeling was maybe 50% of that original feeling combined with 50% of the seasickness of a few days before. Kind of hard to explain, but it was as if the cigarettes could now bring to the surface the seasickness that I had just recently learned to push down below the surface. Again, a bit hard to explain.

I repeated the experiment several times (really couldn't let that whole carton of Marlboros go to waste) and each time the result was the same. The seasickness or some reasonable facsimile would come back each time.

After a few tries I realized the exercise was pointless and I just give the cigs to one of my shipmates and that was that.

The happy accident was somewhere in my brain was now imprinted a rather strong association between cigarette smoking and seasickness. Before that summer I had tried to quit (and had quit) smoking many times but while I was "off" them I would sometimes see other people smoking and wish I could too. Sometimes I'd even dream about smoking. After that summer, there was never any more of that. Sometimes I would even just see the Marlboro packaging and feel a tiny wave of nausea.

And in the intervening almost 40 years, I have not picked up a single cigarette since, nor felt like doing so.

In the closing voiceover of A Clockwork Orange the narrator, the protagonist Alex, says "I was cured, all right.". In the movie this refers to the fact that Alex's conditioning has been successfully reversed meaning that he was able to enjoy his old violent tendencies again. (This was brought about by an early version of Political Correctness).

However in my case, I was cured by the conditioning itself (and not cured of the conditioning as in the movie). By establishing a link between cigarette smoking and seasickness in my mind, I was able to rid myself of a nasty habit that had plagued me for about four years.

I often wondered if something about this technique could be generalized to help others. The challenges would be great, but then so to would the rewards.