To Île Aux Marins and Back 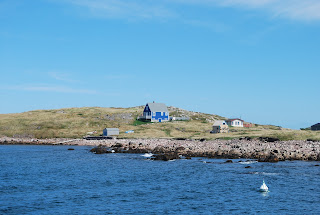 I recently got back from a trip to Saint Pierre et Miquelon, two French Islands just off the coast of Canada's Newfoundland. These islands actually belong to France, and have for the past 150 years. The people there speak French, hold French citizenship, vote in French elections, are educated in the French educational system and if they get sick, are treated in the French medical system. In short, a little bit of France in North America, as they like to describe themselves.
One of the day trips I took while there was to Île Aux Marins (translation "Sailors' Island" - pictured above) - a small island reachable by a very short ferry trip from the main island of Saint Pierre. Before 1963 this small island was fully inhabited by a small number of local fisherman. From 1963 to about 1985 it was uninhabited and it's buildings fell into ruin. However, starting around the mid-1980s some of the buildings have been restored, and many others have been completely rebuilt as vacation homes. As such, the island is an interesting mix of a living history museum combined with a convenient vacation spot for people from Saint Pierre who arguably already live in a vacation spot!
To reach the Île Aux Marins there is a public ferry that goes out and back several times a day. There was a return ferry at 4:30 PM and then another at 5:00 PM. To make a long story short, myself and a Canadian woman with whom I was touring the island managed to make a wrong turn in heading back for the ferry. Once I realized this I took off running only to get to the ferry just as the boat was literally two feet from the dock.  It was a small boat, very informal operation, and the boat driver could have seen me running, figured out the predicament (it was the last ferry of the day) and returned the two feet needed to pick us up.
But no - he said something about coming back for us in forty-five minutes (which I think may not have even been true) and went on his merry way.
OK we were dumb to have taken the wrong turn and we should have allowed more time. But still what's wrong with helping out a couple of obvious tourists especially given that tourism is the number one (arguably the only) industry of the island? But it was not to be.
However our despair didn't last long. For no more than five minutes later along come two locals, Jacques and his son Gabriel, who have one of the vacation homes on the Île Aux Marins. They saw us, and quickly offered us a ride back. Here they're at the dock at Saint Pierre after dropping us off. 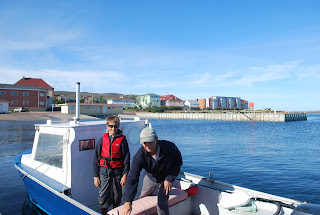 I find this whole tale so characteristic of my many experiences in French countries. Yes, you'll get the occasional bad treatment like the ferry driver who could have gone slightly out of his way for us but chose not to. And who then tossed in the "I'll be back in forty five minutes for you" which I suspect wasn't even true. But then you have the folks like Jacques and Gabriel who could not have been more kind, gracious, hospitable and whose sole interest was that we have a good experience and favorable impression of their island, and in fact, their country.
It reminded me so much of a day back in 1988 when I was bicycling in the Rhone valley and a storekeeper, knowing I was a tourist and wouldn't know the difference made sure to give me a fifty Franc bill in change that he knew to be counterfeit. This was after he had stalked me up and down the aisles of his store evidently because he thought I was going to steal from him. At the very next store I went to I used the bill (I had no idea of its counterfeit nature) and the next storekeeper said "C'est faux, C'est faux".
This was rather disheartening until a day or two later when my innkeeper very matter of factly knocked fifty francs off his bill just to make up for the previous negative experience.
In any case, big shoutout to Jaccques and his son Gabriel. Merci!
Saint Pierre Miquelon Ile Aux Marins Ferry