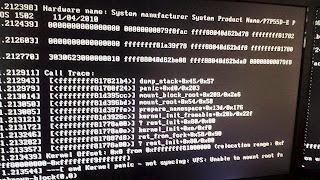 After upgrading from Fedora 21 to Fedora 22 I experienced a kernel panic on booting into the new, 4.0.2 kernel with the message given in the title "VFS Unable to mount root FS on unknown-block(0,0)".

Again, in the interest of brevity, I ran dracut manually on the 4.0.2 kernel and it errored - complaining about "no module bootchart found".

(Bootchart is a package I had installed previously that attempts to measure or profile time spent during booting - I'm assuming that F22 dracut does not have the needed support.)

Fortunately Dracut has an option to ignore arbitrary modules e.g. bootchart with the parameter -o.

So the fix was ultimately to do something like:

and then later when I could boot into the new kernel

There was a bit more trial and error then I have described here with some false starts but my conclusion is that {Fedora22/4.0.x} Dracut does not support "bootchart".  As a conseqeuence the initramfs was not built during the upgrade. Regenerating the initramfs using the -o bootchart option allowed me to correct this issue.
bootchart dracut F22 Fedora 22 fedup upgrade